If you want to view the live feed in Spanish, please click here. 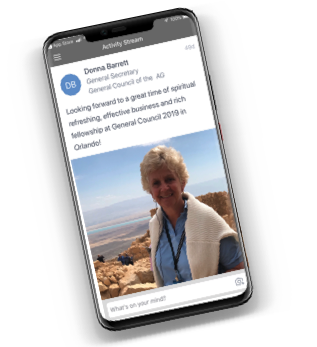 Download our GC21 mobile app and keep up to date with the latest information regarding General Council 2021.

Go to your App Store and search for AG Events on your iPhone or Assemblies of God Events for Android users.

Doug Clay serves as general superintendent of the General Council of the Assemblies of God, part of the largest Pentecostal denomination in the world. The church has nearly 13,000 congregations in the United States with over three million adherents. The U.S. Assemblies of God is part of a larger World Assemblies of God Fellowship with a membership of over 69 million.

Prior to his present position, Clay served the church as its general treasurer for nine years. He was superintendent of the Ohio District from 2004-2008, and pastored Calvary Assembly of God in Toledo, Ohio, from 1997-2004. Clay has also served as the Assemblies of God national youth director (1995-1997), Ohio District youth director (1989-1995) and as a youth pastor in Ohio and Iowa.

He is a 1985 graduate of Central Bible College in Springfield, Missouri.

In 2014, JJ Vasquez and his wife, Liz, sensed God leading them to plant a church called Journey in the heart of Winter Park, Florida, and to serve their community and the city of Orlando selflessly. Since the start they knew God was calling them to create a place where people could invite their friends and family and they would feel welcomed.

Vasquez holds a Master of Divinity degree from Southwestern Assemblies of God University. He is the author of Hello God.

Free Worship is a Christian worship band serving the inner city of Chicago. The team ministers weekly at their home church, New Life Covenant. At the heart of Free Worship is a desire to see God revive His church and release a work of His Holy Spirit so that time spent in worship and singing would result in transformed lives. The name Free remains a constant reminder that we must always make room for the leading of the Holy Spirit.

Whether worshiping on a Sunday morning, recording in a studio, or simply rehearsing; Free Worship operates under one simple truth - we are all created for God’s glory. It is their sincere hope that any gift, talent or performance would disappear in the light of Jesus.

Make plans now to join us for General Council 2021. Please use the links below to register for the event and to book your housing accommodations. You will need a valid credit card to both register and book your housing. Looking forward to a great time in Orlando this summer.

Brittany Jones has been married for 11 years to Travis Jones. They together have two daughters Jalynn and Jayda. In 2017 the two of them started Motivation Church in Richmond, VA. Motivation is a thriving, life giving church that is known for its diversity.

After growing up in the inner- city, poverty-stricken community and suffering many years of childhood abuse and a mental health diagnosis, Brittany’s desire is to reach all people. Brittany shares a story of hope and redemption. She travels the US sharing her story in hopes to encourage and inspire.

Greg and Shaylyn Ford moved to Columbus, Ohio, in March of 2010, with a vision to ignite a movement of Christ-centered, multiplying churches. On January 23, 2011, One Church hosted its first official service. Since then, the church has continued to expand. As the numbers grow, so do the stories. Lives are being transformed through the power of Jesus. The Fords are a family of five. With Greg and Shaylyn are Ella, Hudson, and Miles.

Aaron Burke is the lead pastor of Radiant Church in Tampa, Florida. Aaron and his wife Katie moved in faith to Tampa in 2013 to plant Radiant despite not knowing anyone in the city, The church has since launched 5 locations and has seen over 10,000 decisions for Christ. Radiant Church has been recognized consistently as one of the fastest growing churches in America (#13 in 2018, #4 in 2019, #5 in 2020).

Aaron also serves as on the lead team members of the Church Multiplication Network. He has a huge heart to help plant churches across the globe. Aaron’s leadership podcast, Made for More, releases the first Wednesday of every month. Aaron is an avid crossfitter and loves to hang out with his five children.

Waleska Ramos-Orellana and her husband Roberto are the Lead Pastors of Casa de Amor y Fe.  We have twin sons and a daughter who are part of the ministry. We are family-based church and we believe that the foundation of our community and the church, is the family. That is why we dedicate so much of our personal time to work with husbands and wives. Our slogan is, “Perfect Marriages don’t exist, but we can have Healthy ones.” Because of our direct involvement with the lives of our people, that in turn has become the DNA of the church and has been key to our growth. People who have been restored and healed, now restore and heal others.
Cody Cochran is a fun-loving, passionate, and free-spirited husband, dad, friend and follower of Jesus. He is a rural guy with a heart for rural America, which he expresses in his down-to-earth and practical approach to life and ministry. Cody has pastored Bethel Assembly of Anson for more than 20 years.

Mike & Ashton Santiago moved to Raleigh, North Carolina to start Focus Church with only ever having visited the area once before. Since moving, Focus Church has grown to over 1000 in attendance with multiple locations. Advocating for a healthy church in every community, he is a young voice for church culture through the Church Multiplication Network.

Passionate about leading worship, Ashton has written, recorded and released songs with her team, Focus Worship. When he is not at church, he can be found golfing with his son Joel, playing worship music with his oldest daughter Ariana or playing Uno with his daughter Harmony.

Brad Leach is an experienced church planter devoted to establishing reproducing churches in the city. In 2011 he launched City Life Church in Philadelphia. City Life has grown to be a thriving, diverse, life giving church in South Philly. Through City Life, Brad has helped to start several more churches and programs to serve the city with compassion. Brad’s dream is to lead City Life to adopt an underdog generation, and raise them to be spiritually and emotionally healthy leaders of families and churches. Brad has been married to Leah for thirteen years, and has four energetic kids.
Ben & Kathleen Struss are AGWM missionaries who have been serving in Indonesia since 2014. At age 13, God called Ben to be a voice to the nations. Since planting International Church Bogor in 2019, they have had people from over 25 different nations involved in their church and ministry. They live among the Sunda people, the largest Muslim unreached people group in the world. Their vision is to impact West Java by planting churches in the never reached areas of Indonesia.